This will be the first post about how Morgalla came to be.  The main character from "The Trilogy of Morgalla" started off as a tongue-in-cheek black comedy reply to many animes which I had been watching at the time in the mid-90's including Devilman, Project A-Ko and Devil Hunter Yohko.  In 1995 it was just an idea, a couple of sketches of a girl with horns.  First she would have red skin, yellow eyes and a tail but her look would soon change. 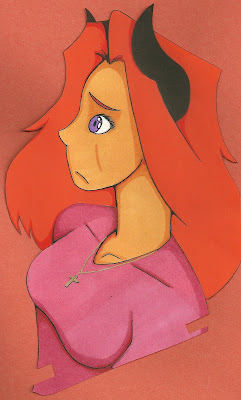 I recently had to think about where her inspirations came from and really they're all subliminal.


In 1981, one of the first movies I ever saw in the theater was "DRAGONSLAYER".  I would watch it a hundred times the following years on cable.  The movie is just COOL, even to a child.  Though I and my siblings couldn't wait to finally see the dragon.  It's kinda like JAWS where you know it's a shark and you get hints of what it looks like.  Due to restraints of budget and special effects, the film makers had to be clever.  For 1981, the effects were awesome.

My favorite character of the movie was Valerian, played by Caitlin Clarke.  When we first see her, she's actually disguised as a teenage boy to avoid the lottery that the King Casiodorous Rex (love the name) had implemented.  What kind of lottery you ask?  To keep the dragon Vermithrax (another cool  name) from torching the kingdom, a female virgin of a certain age is selected to be sacrificed twice a year. 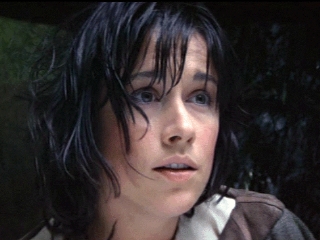 There are a couple of subtle hints as to Valerian's true gender and it doesn't take the main character Galen to discover (by accident while swimming) that he is a she.

But apparently the entire kingdom was fooled, I guess they're not exactly the brightest mankind had to offer.  A third into the film she reveals herself after everyone thinks the dragon is dead.  No need to hide now that the lottery is gone, right?

Oops...dragon ain't dead.  Lottery back on.

In this scene, you can see her apprehension along with the other girls.  It's very subtle on her face what she's thinking but she summons her courage and she has a lot of it. 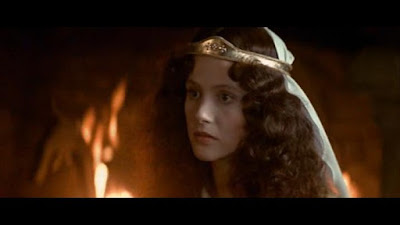 I have to mention another good character that wasn't an inspiration to Morgalla, but I had to admire her.  Princess Elspeth played by Chloe Salaman is also courageous though she starts off as clueless.  See, the rich get to keep their daughters out of the lottery and she's the king's daughter...can't get any richer than that.  But when she finds out the truth, she decides to rig the lottery and sacrifice herself and go in place of all other girls.  I suppose she felt guilty that others died for her safety.  Not even the king could save her because of public opinion and the fact the entire kingdom was kinda watching this unfold.

Back to Valerian, her attitude towards life can be a little cynical at times but that chip on her shoulder wears down by the end of the film.  I think we all do that when we open up to others, something that I would learn for my own writing.

Though she's not the one who ends up fighting the dragon, it was her to sought out a wizard from another land to come and fight it.  She's no warrior, but then again neither is Galen, played by Peter MacNicol and he's the one who has to wield a spear and face Vermithrax.  I will commend her though for having the mindset and skill to make him a shield out of the dragon's scales that have been shed all throughout its lair.  She even faced off against Vermithrax's children. 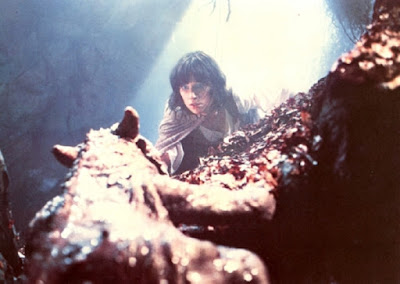 Another aspect of Valerian that I liked was her look.  She's not supermodel pretty but her appearance is quite attractive in a "normal" way.  If I saw her out of costume and had to guess her profession, I would say she was a grade school teacher, maybe kindergarten.  One issue that I had with the abomination of a film Tim Burton's Planet of the Apes was the fact that even though the humans were supposed to be savage, the women still had make up, perfect hair and perfect skin. 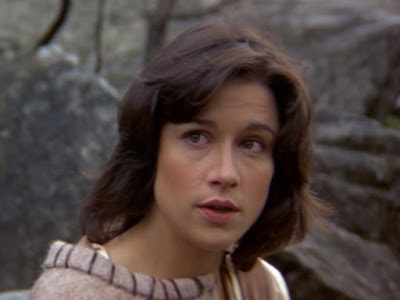 Here, her physical attractiveness is believable even though it's still a movie.  Even though there is a very brief nude scene, it fits in with the plot and isn't used to "show how hot she is".  Not like Demi Moore in The Scarlet Letter.

Caitlin Clarke would go on to be in character roles in movies and TV.  She guest starred three times on Law & Order as three different characters.  Sadly, she died in 2004 from ovarian cancer, the same disease that claimed Gilda Radner.  Caitlin was 52.

I applaud her performance and I applaud the filmmakers for making both lead protagonists brave but in a believable way.

Both Valerian and Galen are mortal, living in a world where one can die very easily.  I would say that they both influenced Morgalla a little, but Valerian way more.  That's where her influence upon Morgalla comes in.  She doesn't sit around for someone else to do it for her.  If she does that, surely she would die.  She's forced to be strong.  She puts on a tough exterior but is able to love and open up to others.  Because of the fact that she has to hide what she really is, she is unwilling to open up to others.  Much like Morgalla.