My Love/Hate Relationship With Transformers: The Movie 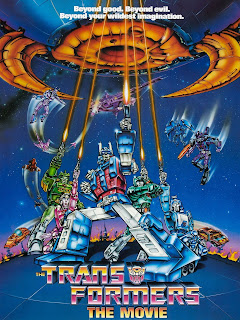 We're greeted by twin suns, their fire a beautiful spectacle of cosmic power. From the dark, a figure emerges, massive and menacing. Right off the bat we are aware that its intentions are hostile. The planet Lithone stands it its way, a race of mechanical people. You briefly see them enjoying life until hell rains down upon them.

"It's Unicron!" One of them shouts.

The planet is devoured by Unicron in an animated sequence that's horrifying and yet beautiful at the same time.

After this sequence, rock music plays and the title "TRANSFORMERS: THE MOVIE" comes into view.

On the thirty-fifth anniversary of Transformers: The Movie, I reflect on how it affected me as a Transformers fan and movie buff and how it molded me as a writer.

The film wasn't very well regarded by critics and even by some fans; Leonard Maltin called it "obnoxious", and even while the film has flaws, one cannot ignore all the hard work and artistry that went into making it.

Before 1989's "The Little Mermaid", animation in America has never been taken very seriously by mainstream audiences and certainly not taken seriously by most of Hollywood. Walt Disney himself wanted his people to know that they weren't making "cartoons" but films. He got a lot of respect, but I think he didn't get the adoration that he really wanted. He wanted to be seen as a peer among the best of Hollywood.

Animation has often been seen as children only. Pity, for you can literally do anything you like and the only limits is ones imagination. There are some rare examples of 1981's Heavy Metal which rightfully deserves a rated R. But some animation like the Secret of Nimh or the Rankin/Bass Hobbit film of 1978 are appropriate for children but surely smart and entertaining enough for adults. In the animation world where basically there was only Disney, maybe Warner Brothers, maybe Don Bluth, hardly anything else got attention and "cartoons" were only about singing mice and fairy tales.

Transformers: The Movie was clearly made for fans and fans only, a bridge between seasons two and three. They knew that they weren't going to draw in any non-fans, unless they were the parents accompanying their children. The film has become a cult classic among animation enthusiasts, heavily influence by anime. The only other animation that compares was Robotech.

Everything is amped up to 11, the animation being the most prevalent. Everything on screen is a delight to the eyes, especially to an 11-year-old boy who is a big Transformers fan. We see familiar faces of Autobots and Decepticons larger than life. It gave us something we've never seen before and never since.

Then...Autobots start dying one by one and it's clear that another element has been ramped up to 11: violence. They got away with the amount of violence because it's just robots getting blown up. Robots don't actually "die", right?

The design of ships/buildings/planets/aliens was brilliant, rivaling the likes of Star Wars. Ralph McQuarrie and others should be proud at what he inspired. I wish they had models or toys of them. Shame. Well, at least I had legos and I could build them! Now granted, all alien life was mechanical in origin but that leads me to another thing I admire about the film: In animation you can do anything, why not push the envelope and really make something unique?

Speaking of Star Wars, it played a major role in much of children's entertainment during the 1980's.

Toy manufacturers saw how popular Kenner's Star Wars toys were and realized that children weren't just playing with an action figure, they were playing with characters from a movie that they love. When you think of it, most 1980's children's television had a toyline to go with it.

Sadly, this is where my biggest pet peeve of Transformers: The Movie comes in. It's rather cynical to think that they killed off most all the 1984 characters just because their toys weren't selling anymore, and they introduced NEW characters because they got new toys to sell.

The death of Optimus Prime is the Old Yeller moment of the 1980s, and even though they already had plans to bring him back, it was still a shock at the time. I should have known that characters don't die in situations like this, I had already learned that with Spock.

"I crushed him with my bare hands!"

Nowadays when a classic character is dies in the story, they not only lose their life, but the spirit of the character is destroyed as well. Justin Hammer put it best:

"You don't just go and try to kill the guy. I think, if I may, you go after his legacy."

At least they treated Optimus Prime with respect, having him die a hero and turning the tide of a terrific battle. Megatron had to cheat to defeat him. You don't see that today. Killing off a character has never been a sin and even though it's bummed me out, I keep in mind that it IS fiction. The greater sin is destroying a characters legacy.

Flint Dille was a story consultant on the film. "We didn't know that he was an icon." He said.

The producers admitted they went too far. BUT, they also admitted that may have been why the film remains in some people's psyche. I will give it credit for trying to push the envelope. I think they treated their audience of children with respect that we could handle the things happening on screen.

It IS bad enough that many beloved characters died, but at least we did get some new and interesting characters. Kup is one of the best Transformers ever and they got Eric Idle himself to be the amazing Wreck-Gar. The rest of the voice cast is amazing and is one element of its legacy.

My only two real issues with film is the death count of the classic characters only because their toys weren't selling anymore and focusing too much on the new toys...er...characters.

Still better than anything from Michael Bay.

Growing up with a lot of these shows was an eye opener, that one can have a vivid imagination and create things that others can enjoy. That's what I wanted to do when I grew up. The biggest lesson I learned from Transformers and all the other animated properties like HeMan, GI Joe, Thundercats and many others is that one shouldn't look down at their audience. Treat your audience with respect, both their minds and their hearts.

Modern Hollywood has forgotten this lesson.