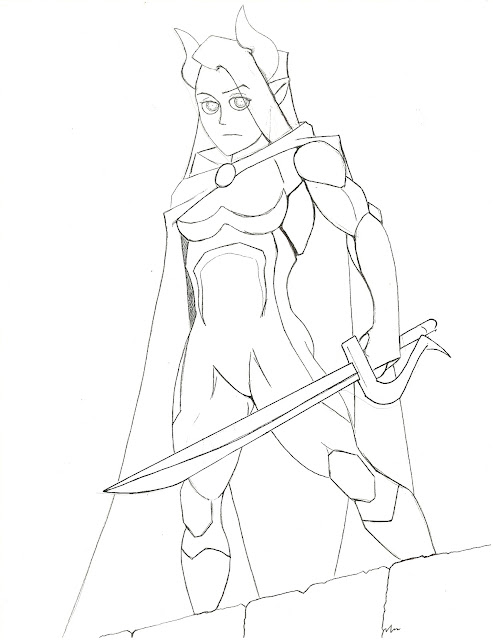 The Girl With a Hood

Tough to draw a girl wearing a hood when she has horns. 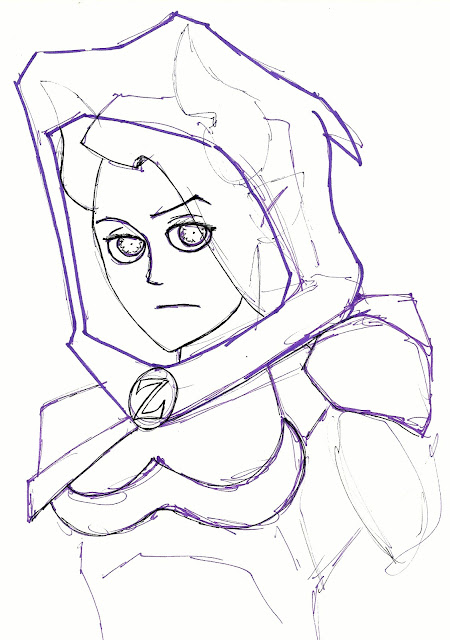 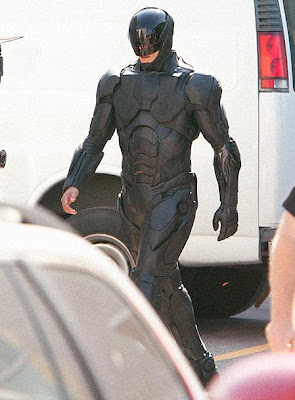 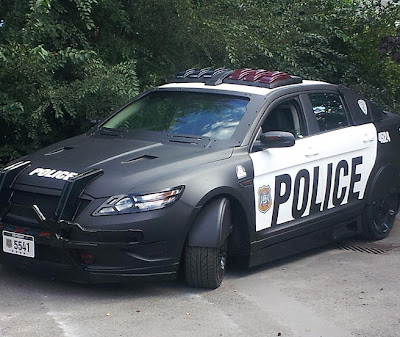 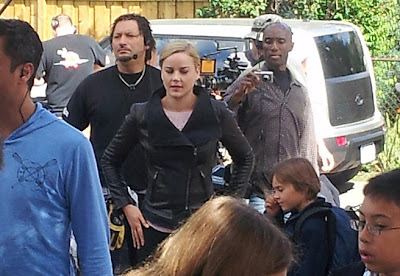 Busted, dude.  You are TOTALLY taking a picture of Abbie Cornish's ass.
Posted by Jon David at 7:50 PM No comments: 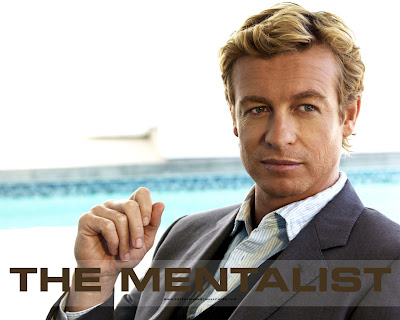 Changed the channel...
Posted by Jon David at 4:15 PM No comments: 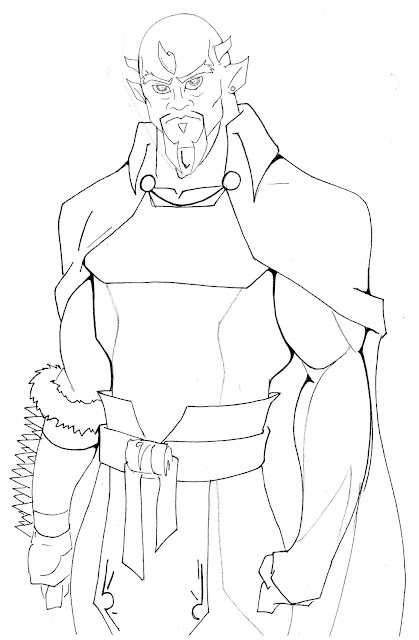 What I Liked About the Prequels

Among the nerds and geeks of the world, there is one word that's like nails on a chalkboard:


Star Wars, Episodes I, II and III are loathed by many.  They've been reviewed and ripped into for years now.  RedLetterMedia for one made the absolute beginning and end of what the issues are with the prequels and I agree with everything the said about them.  But with all the crap that's been said about George Lucas and his "work"...I thought I'd try to keep things positive.

Though they are barely watchable, there were some elements of the prequels that I actually enjoyed:

Palpatine had two faces:  the one he showed to the public, and his real face.  One good thing about the plot was how Palpatine used both the Republic and the Separatists against one another.  He was a true puppet master and it didn't matter who won the Clone Wars...he was going to win everything.

Ian McDiarmid looks like he's having fun with the dual role despite that he has some weak dialog.  The elaborate costumes and sets (when he's not in front of a blue screen) and I think he came back to reprise the role out of loyalty to the franchise and fans.  I have to admire him for that. 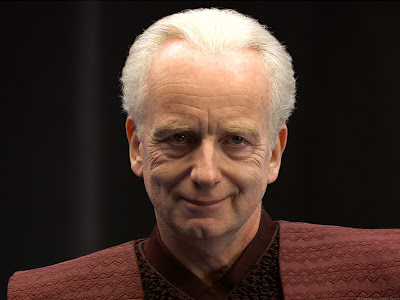 I can understand why both he and Ewan McGreggor wanted to be part of these films, really I do.  Liam is one of those actors who can take a weak script and weak dialog and make it work.  Even when his co-star is one of the most infamous of sucktastic characters.  I was expecting a cameo from him in episodes two and three, alas it was not to be.  I wonder if it was planned and he said no so maybe the idea was dropped.  Can't say I blame him.

But the character of Qui Gon Jinn was cool and Neeson played it well as usual.  When Alec Guiness described the Jedi Knights of the Old Republic I had many ideas of what they would be like.  Neeson nailed it, not just how they looked but more importantly the way they acted. 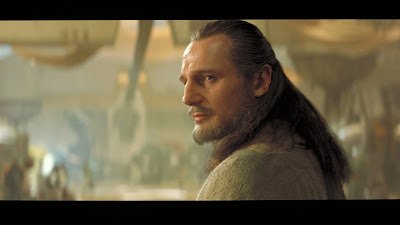 Considering the material given to him, I think McGreggor did a great job.  Not only did he have to read the horrible dialog but he had to pay homage to the character made famous by Alec Guiness.  Of all the performances of all three films, he gives the best.  They barely scratched the surface with this character and it was a shame that he didn't have more to do in episode one.  Another flaw:  they made all three films about Anakin. 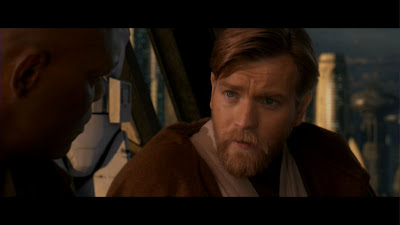 Everyone loved them.  It was the one thing that even the people who hated the films loved.  They were cool but more importantly, I respected the actors like Ewan, Liam, Ray Park and even Hayden Christensten for learning the choreography.  Sure there were stuntmen, sure there was cgi, but there was a lot of performing by the actors to make them entertaining.  I also liked how they were shot, hardly any zoom-ins at all, almost as if we were watching this performed on a stage. 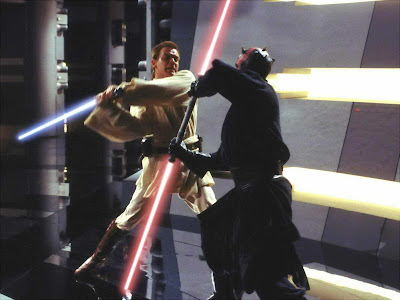 One element in episode one that was awesome was the fact that we saw Sith and Jedi at their peak of power and skill.  With the original trilogy we saw one on one dueling but here we got the bar raised.  Not only that but the Darth Maul double lightsaber was a neat and different design.  I would have loved to have seen a Jedi with the same kind of saber.

Then there was the battle of Jango Fett and Obi Wan which is really one of the ONLY things worth watching in episode two.  It was neat to see someone other than a Sith fight a Jedi, showing that they're skilled warriors but not indestructible.

He became the poster boy for episode one and immediately all the fans loved him.  He was just so COOL looking.  Where Qui Gon live up to what a Jedi looked and acted like...Maul was what we all had in mind for a Sith Lord and beyond.

Everyone speculated that he was going to be for the prequels what Vader was to the original trilogy.  When I first saw the Phantom Menace, many let out a sound of disapproval when the character was cut in half.  The coolest-looking character in the movie and they pulled a Boba Fett; we should have seen it coming. 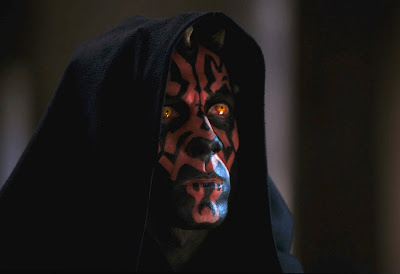 Star Wars was back.  That which so many had loved as a kid was coming back!  The trailer was brilliant and gave just enough to make us all excited for it.  All George Lucas needed was "Star Wars: May 19th"...that's it.  He needed nothing else, but he gave us a little more.  You saw a young Obi Wan, lightsabers, droids and aliens.

Part of the reason I feel that episode one in particular was a let down was the fact that there was all the hype behind it.  For that, Lucas cannot be blamed.  All he did was show a trailer and have some promos, it was US that raised our expectations.  Sure, he DOES have to share in some of the blame in regards to having Jar Jar in the movie (we're never going to forgive you, bro). 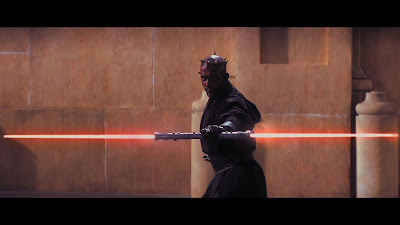 But in those months that we waited, there was the hope that Star Wars, the most awesome trilogy of movies ever to exist (up until that time) was coming BACK!  We were going to know the full story of Anakin Skywalker, the rise of the Emperor and how a once peaceful republic turned into a brutal dictatorship.

We were blissfully ignorant...
Posted by Jon David at 7:35 PM No comments:

Drawn by the amazing Kid Kaos: 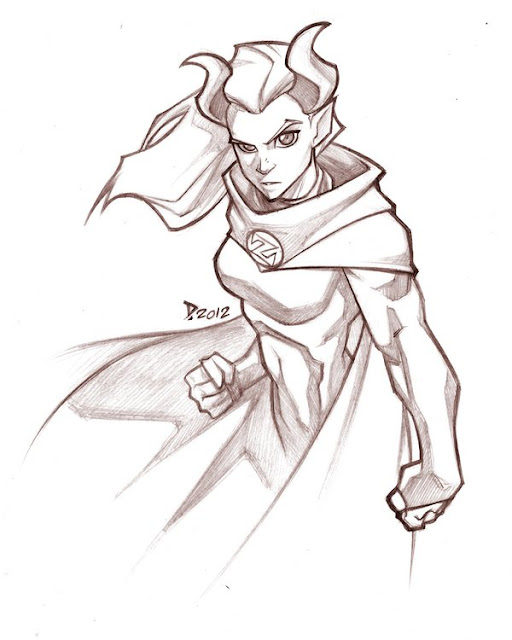 http://thekidkaos.deviantart.com
Posted by Jon David at 11:21 AM No comments: 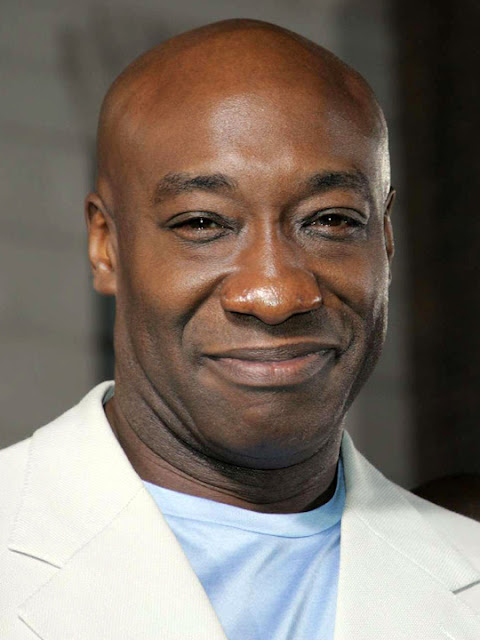