In 1982, Don Bluth made one of the greatest animated films of all time:  The Secret of NIMH.

Hailed by many, the film has a fan following that spans now over three decades. Bluth made a movie that was entertaining for children and yet smart enough for adults to enjoy. Sure the movie has talking mice, but at no point to they sing and at times the film can be rather dark. For 1982, an animated film such as this is unheard of. To my knowledge, it didn't do too well at the box office, but thanks to cable TV, it turned into a classic. 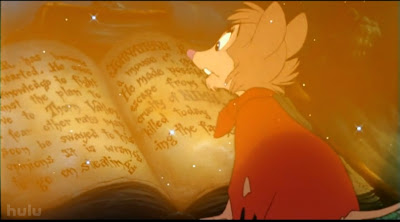 Mrs. Brisby is the main protagonist who faces titanic elements against her; whether it be a farmer's plow, her child's illness, an owl who might eat her, the list goes on.

She's often afraid, even terrified, but she'd be a fool if she wasn't. She knows quite often that she's in danger but it's for the love of her family that she moves ahead. That's a sign of true courage: knowing that there is danger but facing it anyway.

Besides her children, she's the smallest character. This only adds to the dread when you think about it. Morgalla also happens to be surrounded by demons that dwarf her in size. 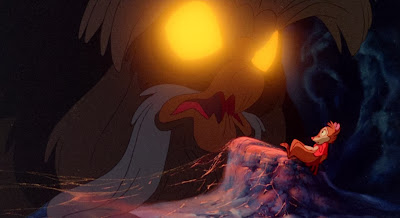 But she never lets it stop her. The biggest difference in the personalities between the mouse and the demon is that Morgalla has to act tough every moment of her life. Show any weakness in Hell...and you're done.

The biggest element they share is the fact that despite overwhelming odds, despite even being afraid, they find a way to get the job done.