So joblo.com had an interesting article:

With the exception of Wonder Woman, most all other female super heroes are based off of a male counterpart:  Supergirl, Batgirl, She Hulk.  Hell, even Catwoman is a spin off of Batman.  Now granted, they're all great characters but it feels that a woman with the big Superman "S" on her chest is merely following, not leading. 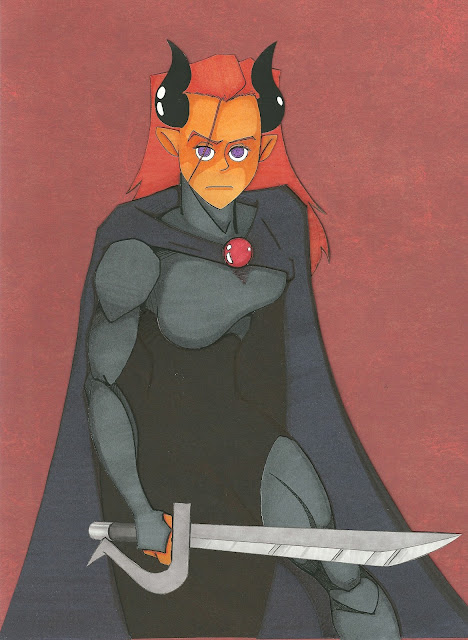 Why?  Why not.  She's not following in any one's footsteps.

Morgalla "turns 18" this year.  I created her in 1995 and since 2000 I've grown the character.  It was more of a hobby back then.  But the fact that she is demon, female, young...all of that is secondary.  First rule of making a character:  make them interesting.  I hope I succeeded.

So when it comes to joblo's article, I might point out that for every one Ironman, there is a Ghost Rider, Green Lantern, Spider-Man 3, Batman & Robin, etc.

For every good movie, there is a shitty one.  One should hope first and foremost for a GOOD film.
Posted by Jon David at 7:12 PM No comments:

Man of Steel vs. Iron Man 3

It seems to me that the big showdown of the nerd movies this year is Man of Steel vs Iron Man 3.  Now after the disappointment with The Dark Knight Rises and the first trailer of Superman kinda leaving a bad taste in every one's mouth, it seemed like Stark's third outing was going to be a sure-thing.  It also helps that Marvel has been on a roll over the past five years and still riding a freight train of awesome after The Avengers.

However, I need to mention a new article on joblo.com:

It's encouraging, if it's real and I would say that Iron Man 3 has some major competition.  I would have to mention the new IM3 trailer, too:

Again, I guess we'll have to wait and see just which is the better film.  I would say that the geeks this year are going to be either very satisfied...or crushed.  Just like last year with Batman not living up to the hype, at least we were all happy with Avengers.
Posted by Jon David at 7:46 PM No comments: