I was unimpressed with MIB 2 because of the fact that it was basically the same movie as one with Will Smith being the noob and Tommy Lee Jones being the know it all.  Yes i thas a mystery to it but it seemed to not know what it wanted to be, a sci-fi flick or a comedy or an action/adventure, etc.

Well they've made an MIB 3 and I'm not excited because it seems like the same problems, at least for the first act.  I will say this, I AM thrilled by the prospect of a new twist and that's the young K, played by Josh Brolin. 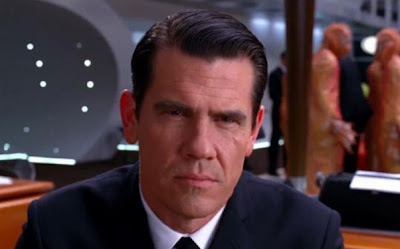 It's great that they got an ACTOR, a person, a human being to play the role and not have to rely upon special effects.  CGI and all that is great, but when you come down to it, you need people to perform in a movie.  This is the only reason I'm thrilled for the film and I hope they don't disappoint.  Yes, we hear Brolin only give one line, but based on this one line it seems like he NAILS it.﻿
Posted by Jon David at 12:43 PM