I'm shocked that Disney did an actual sequel of Tron: Legacy instead of a full reboot...remake...er...re imagining, whatever they call it.  I think the only reason a sequel was made was because of Jeff Bridges.

Many of these remakes are floating around Hollywood, one of which is Starship Troopers, based on the book by Robert Heinlein.  There was a film from 1997 starring Casper Van Dien, Denise Richards and pre-Harold and Kumar Neil Patrick Harris.

I suppose the primary reason why they're doing a remake of this film is because of moder-day special effects.  Yes, they bugs looked great in 1997 but some producers/director is thinking "we can make 'em look better!"  Not-to-mention the fact that they can probably be more loyal to the book.  In 1997 they were troopers armed with machine guns and hockey pads though in the book they were in battle armor.

Hey, you think they'll actually have Latin actors play the roles of Rico, Flores and Ibanez?  Nah, that would be SILLY, wouldn't it?

I can KINDA see why they're doing a remake of this film but usually back in the day if someone did a remake an entire generation had passed.

Another remake announced is a film that's even YOUNGER:  American Psycho.  Based on the book by Bret Easton Ellis and the film starred Christian Bale. 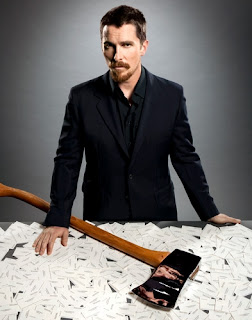 Now THIS boggles the mind.  That movie came out only eleven years ago and it's not a special-effects-heavy movie.  At least with Starship Troopers one can understand that.  But Psycho was story, character and dialog-driven.  Then there's speculation of what differences are there going to be from the book.  One of the commentaries that Ellis was making in his book was the fact that Patrick Bateman was a stereotype of the 1980's Wall Street trader, vain and arrogant.  Will they do the same here?  The first movie was loyal in that regard.

I think this is a mistake, a HUGE mistake.  Bale's performance is creepy and iconic and no update of special effects will make that better.

I think both of these films are being made because of a deficit of original ideas and the grab for a quick buck.
Posted by Jon David at 8:32 PM