Since I mentioned "Legend" in my guilty pleasures, I might as well mention the villain Darkness and how he inspired "The Trilogy of Morgalla".  First of all, the shape of his horns are much like Morgalla and the villainous demon lord Zorach the Unholy.  In fact, Zorach was originally supposed to look more like Darkness at first but now he looks quite different.

I envisioned Hell as looking much like the lair of Darkness, thanks to Ridley Scott and the other makers of the film.  Granted, over the years things have grown into their own identity and my version of Hell looks quite different.

Now when it comes to Darkness, it sounds like Tim Curry is having a great time playing the role even though he must have spent countless hours in the make up chair.  He is to be commended. It's one of the greatest make-up jobs in motion picture history, that and the actor's performance really bring the character to life.

What makes the character interesting and not just a plain old "I-have-an-evil-plan" villain is the way Tim Curry plays the role. At one point he's calm, collected and even gentlemanly with a voice as smooth as velvet.  The next he's a raging machine of fury, yelling "SIT!" or trying to kill Tom Cruise. 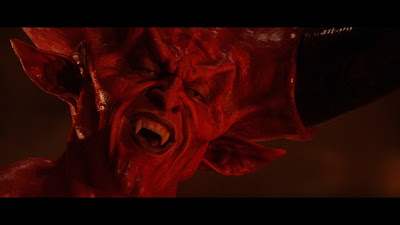 Though Zorach is quite different in appearance and in the way he acts, both the movie "Legend" and the character Darkness were both a big influence as to my writing.
Posted by Jon David at 9:17 PM